Who has followed the current trend and has replaced his older Windows operating system with a newer Windows 8 looking at Playing video DVDs ex works mostly in the tube. The new PC drives are in fact delivered without the need for this feature Windows 8 Media Center Pack including codecs to the end customer.

Microsoft justifies this function gap as follows: The behavior of PC users has changed in that DVD-Video are rarely viewed on the computer. So you've decided to offer its customers to avoid the costs incurred for codecs and software costs and to dispense with the Windows 8 Media Center Pack henceforth. This can now hold for a user-friendly step of the giant from Redmond or in view of the fact that the to acquire additional package for almost ten euro for sale is the motto "A rogue who thinks evil" Acknowledge ...

Quite convinced it certainly seems not to be in the house of Microsoft by his own reasoning, because until 31.1.2013 there is the Windows 8 Media Center Pack download for zero euros - as well as a range of free video players for download that we offer in our software catalog. Within this limited promotional period leads as follows the free media center software:

Step one is to Registration on the action page at Microsoft. Here you entered a valid email address to which the Registration code for the free Windows Media Center Pack Download is transmitted. In step two, one calls in Windows 8 by brushing with the mouse pointer to the lower right corner of the screen, the novel Charmbar on. 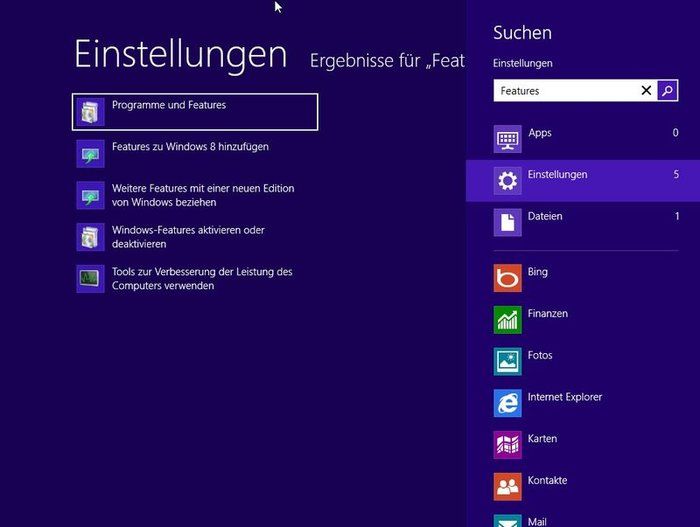 This then is operated by clicking the magnifying glass and typed as a search term "Add features" on. Then, a click on the button "settings" payable below the input field, then the left side of a button "Add features to Windows 8" appears. After you enter the product received by mail Keys and follow the instructions to install the Windows 8 Media Center Pack is integrated into the operating system. Missed promotional period no reason to complain thanks alternatives However that is urgent, because the promotional period ends on 31 January 2013. If you missed this, but does not address the DVD watching on Window 8 computers dispense still wailing break. To play the video pieces of silver, the Windows 8 Media Center Pack after all, is not absolutely necessary, and therefore not its purchase. Finally, teeming with the market free video players such as the VLC Media Player, Zoom Player and several other, all of which play DVD videos for free.