In the Sugar Smash App the player is sent to arrange the task of candy and rainbow candy. The well-known match-3 principle is implemented in the small mobile game in new variants and in an appealing look.

The cute icons will be skillfully combined in the sugar Smash app together to earn points and move to the next round. Numerous always tricky expectant levels waiting to be solved in the match-3 puzzle adventure with a few deft moves. The background story of the little game is from "The Book of Life", A US-based 3D animation movie Reel FX Creative Studios, which is produced by 20th Century Fox.

He tells a ajar to the legend of Orpheus and Eurydice love story. The player will be there to help, to collect various goodies and amulets for the preparations for a big fiesta in the Sugar Smash app Manolo, Maria and Joaquin.

Sugar Smash is available in versions for Android and iOS. The game is in the App Store and the Google Play store under the name "sugar Smash" distributed. The small game contains 90 fun levels with motifs from the animated film. The voices of Channing Tatum, Zoe Saldana, Christina Applegate, Diego Luna, Ron Perlman and Ice Cube are also in the Sugar Smash app on board. The player can look forward to sugary churro challenges and fun power-ups like Piñata bombs.

Sugar Smash app is playable without connecting to Facebook. During the game, although the invitation to connect with your own Facebook account to share the fun with friends is done more often. This can safely be ignored if no Facebook-linking is desired, however. As with the other casual games of Game Studios SGN, such as Cookie Jam, Panda Pop or Panda Jam, no training time is required. The few rules are clearly explained, so that the player can get started immediately and fulfill the tasks required of him. First, they are quite simple. It is enough to push a few icons to the right place to go to the next round. 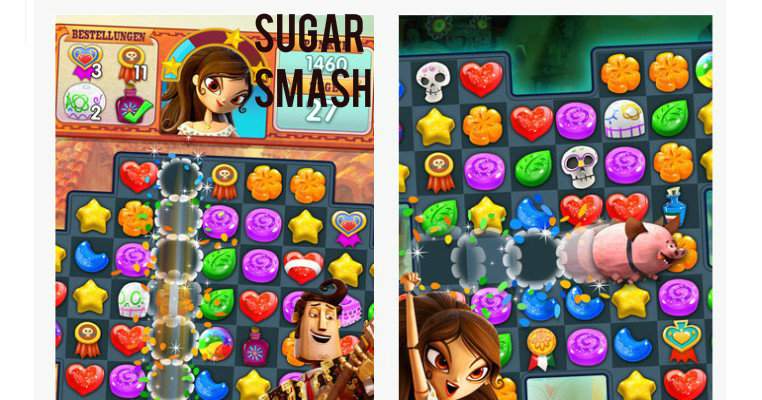 Sugar Smash as an entertaining match-3 game for smartphones and tablets. Source: SGN

Turn off background music in settings

The player combines three identical symbols to collect them or four for special bonus candy. Who brings five identical symbols in a row, gets even a rainbow candy. Very special extras land on their own account in making a T- or L-shape from the symbols. In the settings, the player can get a little help on and off on demand sound and music, if the background droning annoys. Who links the game via Facebook account, you can also disable notifications in the settings here.

Who does not come on at a level, receives a tip on where to lend a hand from the sugar Smash App. With increasing round the tasks become more difficult and more motivating. The The Book of Life Sugar Smash app is free to play. The usual in-app purchases, the player can purchase additional items for real money within the app.