Google sends its users again a special Christmas greeting via Google Doodle. How has it changed over time, find out here! A day before Christmas Eve and the Internet service providers and search giant Google wishes all users a merry Christmas. Google packed the wishes as usual in a Google Doodle, which also carries the official title of "Merry Christmas from Google!". Whoever falls from the clouds, because tomorrow is Christmas already, even still has no gifts, may summarily download the free Google Play Store and search for music, books or apps for a suitable gift. 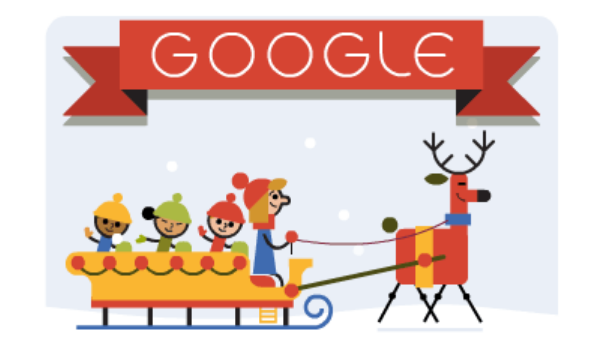 Users who surf today 23/12/14 the net and stumble on the home page of Google, can look forward to a love Christmas greeting of the search engine giant. a funny animated greeting for Christmas takes the place of the Google logo. The doodle shows smiling faces on a toboggan ride in a peaceful winter landscape. the carriage of a grinning reindeer pulling. On the carriage sit three children of different cultures that wave to the user happy. The children not only have different skin colors, which represent the world, they are dressed in different colors. This in turn gives the image an additional boisterous and lively touch. The animated Christmas greeting is broadcast by the way almost worldwide. Users in South America, Australia, Europe or India therefore can enjoy the salute with the waving children. Only some parts of Africa are not there - especially the North - and Russia are missing. However, the latter is not surprising, because Russia does not celebrate tomorrow, but only on 06 January Christmas.

Past Google Doodle for Christmas

That Google via Google Doodle wishes a Merry today is strictly speaking not a surprise. So has this Google Doodle virtually become a tradition. In recent years, Google has sent at Christmas time a special greeting to its users via Doodle. Featuring although this was always Christmas, but ranged from modern, through to playful too cautious. Especially the first doodles were far less experimental. Most Google font was decorated only with a few Christmas elements, as can be seen in the image of of 2002.