The Roll the ball App somewhat reminiscent of the sliding puzzle game from childhood. Were relatively easy to solve this, the virtual version clearly requires more brain - at least in the higher of the 300 Level.

The Roll the Ball App is a simple principle to intelligently

It is hard to believe that this simple game can captivate like that. Players must create a path by moving blocks on which a ball can roll unimpeded from the start point to the finish. Here, have not used all the blocks, some serve only as a feint. Depending on how many moves it takes to solve the puzzle, can be one, two or - earn three stars - at best. Vaguely reminiscent Roll the ball to app Unblock Me - both the graphics that mimics a wooden board game, and the gameplay. Who Unblock Me liked Roll the ball is love alone that's why! 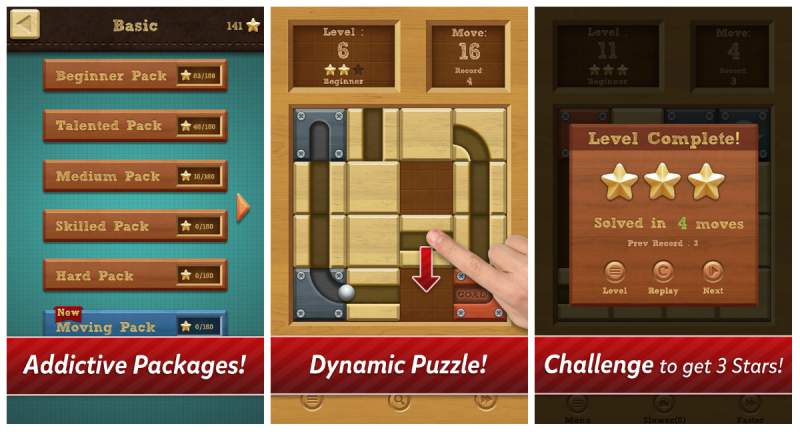 The developers of BitMango specializing in puzzle apps in every imaginable shape and it shows the app also. The makers of numerous challenges have come up with. Currently there are six packs - from beginner through medium to hard - each with 60 levels. Are the first puzzles to master more easily and without a second thought, the difficulty increases progressively. But not only the puzzle in itself be difficult, but additional hurdles such as time limits in some level or rotating elements provide variety. And bit Mango promises concoct new tasks in the near future, which are available with the updates then.

Those who want to bring some life into his gray matter, can free with the Roll the Ball App. The puzzle game is financed by advertisements, which may be a little disturbing, but still placed a total discreetly. Coming at a level of no help, can be acquired via in-app purchases Notes. In such cases, however, Google will help further, some players have already provided solutions to the trickiest levels online. However, you should ask to what extent the lookup of the solutions does not negate the essence of a riddle. But that has to decide for himself ultimately each player.