What are Skype Moji?

Skype Moji represent a new way to exchange information on the Microsoft Messenger. With the current Skype Download Numerous short, concise and funny clips available that can be sent free of charge through the tool. So Skype is following suit and says messengers like WhatsApp & Co., who place a strong emphasis on emoji, the fight at.

What are Skype Moji?

The term Moji is a neologism of the Microsoft Messenger Skype. Similarly, as emoji are short clips illustrate emotions and moods, hence the conceptual similarity. By omitting the letter E, the proximity to the phrase Movie is produced in addition. What is consistent in so far as it is in the Moji's to short video sequences. Similar to GIFs clips only last a few seconds and will open up a new way users to contact each other. Unlike GIFs however, sent clips contain a sound track. Whether this is actually an advantage, remains in times, in which laid more and more value on silent communication, but to be seen.

How can the Skype Moji's are shipped?

The short clips can be found as the emoji behind the smiley icon of the text field. This is divided into five categories currently. By clicking on the clock icon the recent items can be called. Next to it is again a smiley, provides access to the emoji. The last of the symbols contain the new Skype Moji. To see the preview of the clip extends a short click on the preview image. However, the preview will only run as long as you select no other Moji. If the clip is finished or has chosen a different, appears on the icon of the last played Moji's blue arrow. If this is clicked, it sends the respective clip. 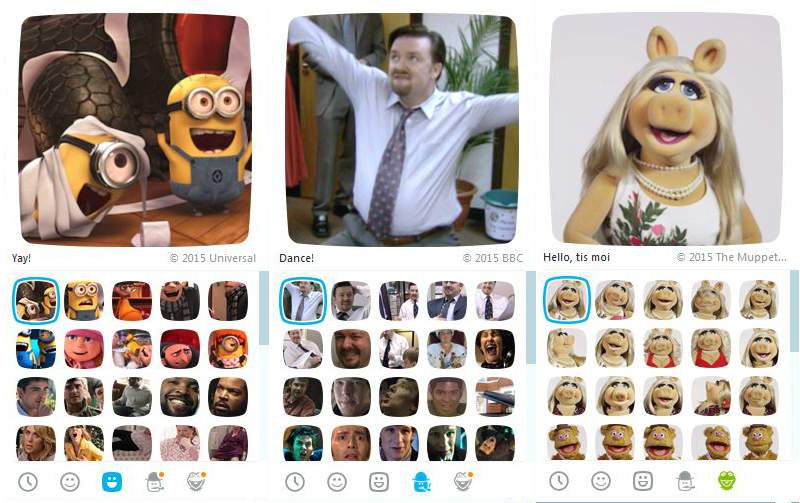 What motives are there?

Thanks to numerous partnerships between Microsoft and various studios such as BBC or universal Skype has integrated a number of Moji's in the Messenger. In a total of three categories, the mini clips can be found. In the column Hollywood is situated next to excerpts from animated films like King Kong, Ted or the Minions a number of renowned actor with striking film quotes. These include, among others, Brad Pitt, Tom Hanks, Arnold Schwarzenegger, Adam Sandler and even grandmasters Al Pacino has the honor. including several versions of Doctor Who and the congenial Benedict Cumberbatch as Sherlock Holmes - an icon on the BBC Stars found. The last category is currently dominated by the Muppets. Although Kermit the Frog is missing, but with Miss Piggy, Fozzi bear, the American Adler Sam and the animal some of the most dazzling Henson characters are represented.

According to Skype, the motifs are further increased gradually.

Free calls over the Internet – without installation

An underrated alternative to conventional applications to the Internet phone calls, is Fonie. Read here all about the clever site! Whether the internet café, on school computers or work - on some computers can and can not do anything and let what fun it. And if neither Skype nor other services are installed on the […]