Should I accept App

Consider the following scenario: The mobile phone is ringing. an unknown number you appears on the display. What are you doing? Do you accept from or pushes you to call away? The Should I accept App supports you in the decision.

More certainty with the Should I accept App

Who gets the owner a call with an unknown number, a little confused react in modern times usually only once. Nowadays it has yet stored any of his contacts in the phone's internal phone book. So who could it be? 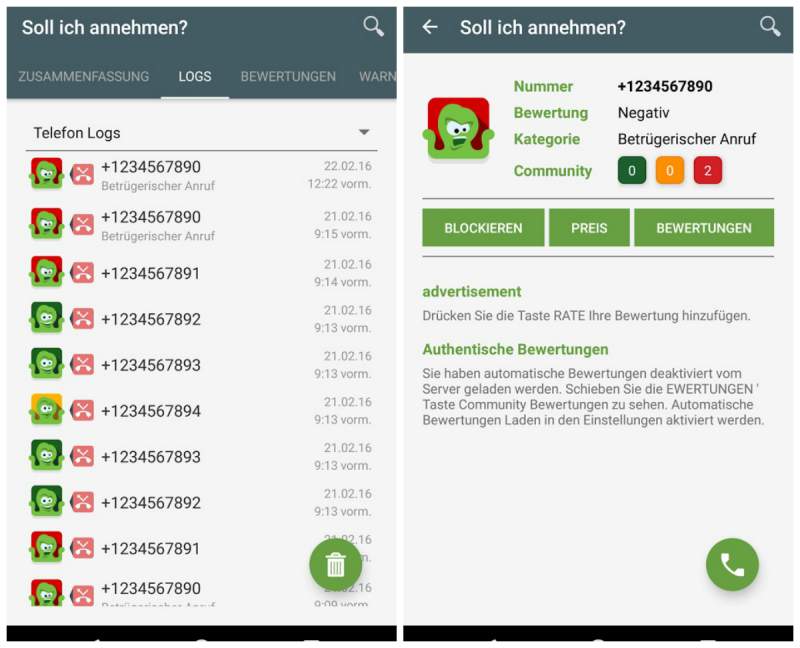 Should I accept the app protects against dubious calls of unknown numbers by assesses them them using community ratings. (Picture: sollichannehmen.de)

Especially since the media for several years reports of fraudulent mesh over the phone again and again, many mobile phone users have become more cautious today - and that's a good thing. Finally, such a scam can cost a lot of money.

But even annoying telemarketing calls are piling up - annoyingly with new numbers. So simply block does not help in the long run.

So why not build on the experience of the masses? That's where the app Should I accept one: It summarizes, as other persons assessed a number previously and rated them accordingly in harmless, questionable and malicious / annoying.

Direct display of the evaluation for calls

If someone calls with an unknown number, the app immediately jump on and display a corresponding assessment to. It should not even have Internet necessary because working with an offline database. Also on details and user reviews can be accessed directly.

In addition, the user quickly gets the opportunity to help themselves and anonymously make a review here. So that everyone helps with the community to build up the database so that numbers can be assessed as realistic as possible. Each entry is checked before activation.

Numbers that are stored in the contact list will not be evaluated. In addition, only public numbers can be evaluated. 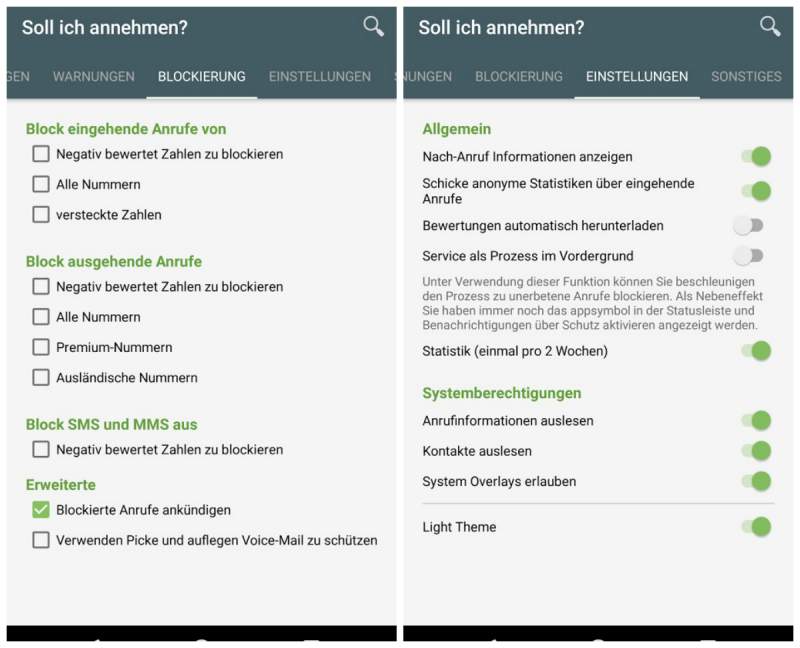 In addition can be as malicious or annoying recognized numbers using the Should I accept app quickly block. This includes the following number formats:

Numbers that are stored in the contact list, can not be blocked. These must be removed first.

What permissions are needed?

When you install and first use the app requires access to the contacts and phone calls. Both permissions are essential for the function of the app, for differentiating between private, stored and unknown numbers. The developers point out that no private, the stored numbers are sent from the phone book to the server and that they remain on the phone strictly.