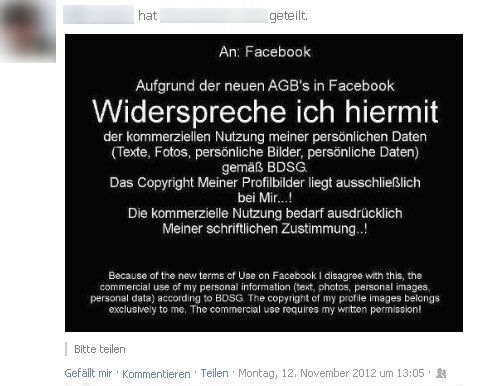 "Due to the new Terms on Facebook I disagree …" – Such or similar text and graphics are present on Facebook in circulation. With them, the user specifies an object to the alleged change in the Facebook Terms and Conditions and the unauthorized use of his data. What many do not know facebookers: The last update of the Facebook Terms was quite a while back, and thus you have no "new" to fear exploitation of their private data. One is a so-called "Hoax" been established – an Internet duck.

Even if the status message is pursuing a meaningful purpose, it has no effect. You could not anyway prevent a status message Facebok from using private data. Legal experts point out that a contract is between the user and Facebook already upon registration come into existence that could not be terminated unilaterally on the one hand and on the other hand, needed in writing – of a status message will Facebook finally heard nothing.

sit up instead of this hoax, you can do something effective for your privacy on Facebook. Read more about this: