You have a FRITZ! Box home? Then worth the BoxToGo app for you surely. The tool with which you can watch dial in from anywhere in your box with your Android device, has been fully refurbished in the beta version.

Some they might know already, because many love them. If not, please read on, this app is extremely handy!There is already a considerable time, the BoxToGo app. It offers you the opportunity to work with all the trimmings access your FRITZ! Box - no matter where you find yourself straight. The prerequisite for this is an Android smartphone or tablet.

His service does the tool for some time - but can still be seen on the graph. Who the final version from the Play Store charges, notice this very quickly. Frumpy it's because the app. The developer has however now provided a fairly stable beta version as an APK that holds a few new functions in addition aufgefrischtem optical appearance.

The BoxToGo app grants you access to the FRITZ! Box from anywhere via smartphone. (Picture: AVM / Editorial)

What can the app do?

Basically, you can make a large extent about the app, which can make your otherwise via the PC, if your logs you to your FRITZ! Box. This includes the show call logs, switching the answering machine, the phone book display and restart and reconnection of the box.

The call monitor displays, for example, calls immediately and can announce via voice output also. About dial so you can also perform free calls - even via Skype - or listen to the answering machine. Of course, all kinds of calls and Internet settings can be set up and control, including call forwarding, wireless and guest access. Also troubleshooting the BoxToGo app is.

Also convenient is the remote control of your PC via the app: on and off and rebooting or screenshots are possible. In addition, your access to all gets connected smart home devices.

The connection between smartphone and box is SSL secured and protected with certificate verification against man-in-the-middle attacks. 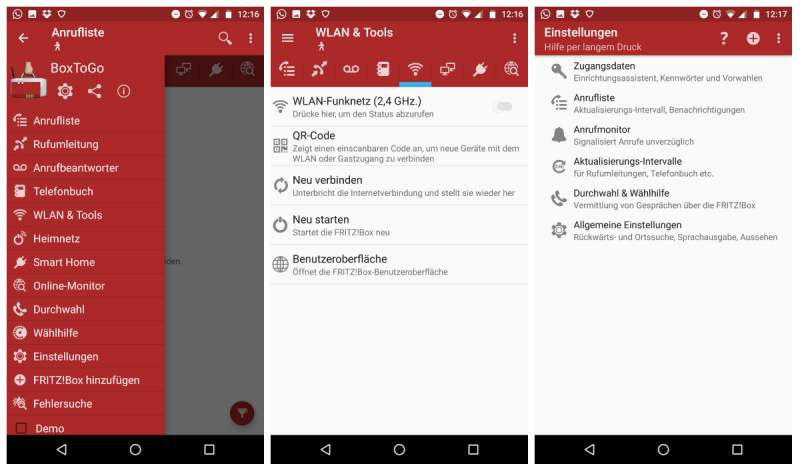 Particularly evident: In the beta was screwed on style. (Picture: Screenshots Editorial / BoxToGo)

And what is new?

Fresh to come in addition to a visually much more appealing user interface, including improved operation are a practical online monitor widget and a smart home widget in the form of a list. In addition, you can leave you your WLAN key as QR Code spit out, which definitely simplifies the dial. In addition, it is now possible to fax PDF documents.

As already mentioned, there are the new design so far only in the beta version, you can download it as the your with us APK. The Google Play store, as well as with us your finds with advertising studded free version in the old design as well as a link to the Play store the corresponding Pro version without ads and with a few extra features for 3.99 euros. The latter two versions should soon also benefit from the new design.

An overview of the app, but still in the old design, gives this video:

Start Menu X offers users an alternative to the standard Start menu of Windows 7, Vista & Co, and can also be used on Windows 8th The freeware summarily replaces the Windows own launcher by a more flexible Start menu. Start Menu X as an optimized version of the Windows Start menu After installation, Start […]

With the Video Live Wallpaper App can be created easily live wallpaper from any videos. Who wants to have video of his loved ones, to a hip clip as wallpaper on your phone or tablet, you can quickly and easily create custom Live Wallpaper thanks to the app. All current video formats are supported so […]